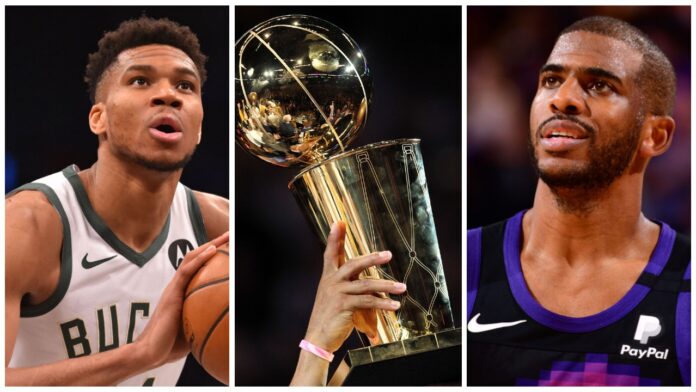 The Phoenix Suns and Milwaukee Bucks will battle it out in the best of seven series starting on Tuesday night in Phoenix, with the winner of the series to take home the Larry O'Brien Trophy and the coveted title of 2020-21 NBA Champions.

It will be a unique finals series, as not one player from either side has won a championship, which is the first time this has happened in NBA history.

It is also an unlikely finals matchup that not many would've picked at the start of the season, as both teams suffer from long title droughts, with the Bucks haven't won the title since 1971, and the Suns are yet to win a title in their 53-year existence.

The Phoenix franchise is also making their first trip back to the finals since 1993, where they fell short of the Michael Jordan led Bulls.

The main talking point heading into the finals opener is the status of Bucks star Giannis Antetokounmpo's health, after 'The Greek Freak' suffered a hyperextended knee in Game 4 of their Eastern Conference Finals matchup with the Atlanta Hawks and missed the remainder of the series.

The injury looked severe, but the Bucks' medical team has ruled out any structural damage to the knee and Antetokounmpo has made a remarkable recovery to be cleared to play in Game 1.

Giannis is AVAILABLE and will start in Game 1 of the #NBAFinals. pic.twitter.com/S9fVRNI5j6

The Suns enter the finals as favourites due to their impressive post-season in which they conquered the reigning champions in the Los Angeles Lakers in the first round, before sweeping the Denver Nuggets in the second, and then beating the talented Los Angeles Clippers in the Conference Finals.

The Suns boast a healthy lineup and have been led by experienced veteran, Chris Paul, who makes his first finals appearance in his 16th season in the league.

His leadership has been paramount this season, taking what was a lottery team with the worst record in the league just two seasons ago to the NBA Finals this season. He hits the finals with some serious form highlighted by a 41-point performance in the closeout win over the Clippers to advance them to the finals.

Paul is backed up by talented young guns in Devin Booker and Deandre Ayton, as well as great three-point shooters in Jae Crowder and Mikal Bridges.

Their depth of talent will also be hard for the Bucks to stop.

Milwaukee on the other hand, will rely on All-Stars in Giannis Antetokounmpo, Khris Middleton and Jrue Holiday to lead the scoring load like they did in the back end of the previous series against the Hawks.

The Bucks will also rely on big man Brook Lopez to be a presence inside, and get some important minutes off the bench for impact players such as Pat Connaughton and Jeff Teague.

Although the Suns enter as favourites, the Bucks have been one of the best teams in the league over the past three seasons, with the best regular season records in the league in 2018-19 with a 60-22 record, and again in 2019-20 with a 56-17 record.

The Bucks have also beaten the 2020 finalists in the Miami Heat in the first round, then the 2021 championship favourites in the Brooklyn Nets in the second round before besting the talented and upcoming Atlanta Hawks in the Conference Finals.

Having done so without the two-time league MVP at their disposal for the last part of the previous series, they should not be counted out of this series.

Things to watch in the series

The Suns are deservedly favourites, boasting a healthy lineup and have the first two games at their home court in the valley. I think the Suns edge out the Bucks in the series due to those reasons, but it really comes down to the health of 'The Greek Freak'.

Giannis has been cleared to play in Game 1, but the question is whether he will be 100 per-cent. I think the Suns will be too good for the Bucks, and Chris Paul will lead the way to the Suns' first championship in their history with Paul taking out the Finals MVP.