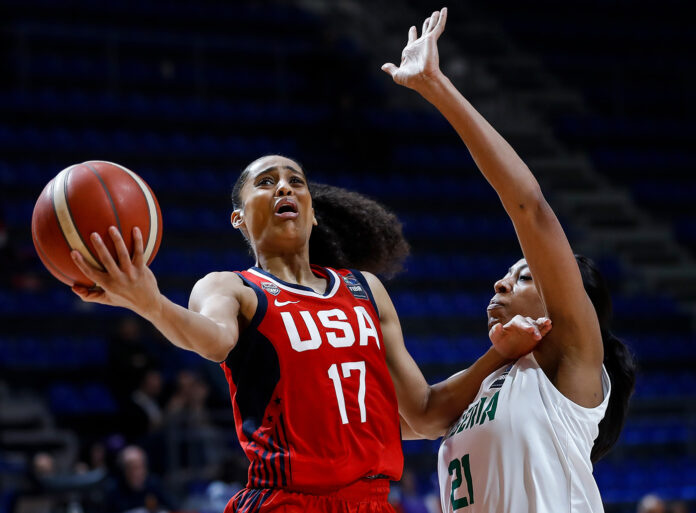 After the postponement of the 2020 Olympics in Tokyo due to the COVID 19 pandemic, the 2021 Olympics have arrived, and the Women's basketball competition is shaping up to be an exciting one, which will finally get underway on Monday July 26th.

Check down below to see who will suit up for the 12 competing teams, including key players for each team, current FIBA ranking and previous Olympic bests.

Team USA is going for its seventh gold medal in a row highlighting their dominance at the Olympic Games. All 12 players in the squad play in the WNBA and they'll be the favourites to win it all.

Key player to watch: Breanna Stewart is the reigning WNBA Finals MVP and Champion and is one of the best players in the world, look for her to have a dominant tournament.

Australia enter a strong squad with five WNBA players, and with a silver medal in the 2018 FIBA World Cup and Olympic Qualifying Tournament, the Boomers will look to go one better in Tokyo.

Key player to watch: Ezi Magbegor is an exciting young talent, being apart of the Seattle Storm 2020 WNBA Championship, and will need to step up to fill the absence of Liz Cambage. The 21-year old will need to play well if the Opals have a chance at winning it all.

After its best result at the 2016 Rio Olympics with a silver medal, and a bronze medal at the 2018 FIBA Women's World Cup, Spain boast a strong lineup that will look to contend for a medal again.

Key player to watch: Astou Ndour will be hard to stop. The 196cm centre (who plays in the WNBA for the Chicago Sky) has been dominant in previous European competitions, and will look to lead the Spaniard to another medal finish this Olympics.

The Canadians come into the Olympic tournament in good form as they won the 2020 Olympic Qualifying Tournament at Ostend, and will look to contend for a medal for the first time in their history.

Key player to watch: Kia Nurse is a talented player for the Phoenix Mercury in the WNBA, being a WNBA All-Star in 2019, and will look to lead from the front for the Canadians.

Key player to watch: Marine Johannes is a talented guard for the New York Liberty in the WNBA, and will look to lead the French to glory in Tokyo, keep an eye out for her.

Belgium have qualified for their first Olympics in its history and are a dark horse to win it all after coming fourth in the 2018 FIBA Women's World Cup, and two bronze medals in EuroBasket in 2017 and 2021.

Key player to watch: Emma Meeseman is an accomplished player, winning the 2019 WNBA Finals MVP, and is a talented power forward who will be hard to stop as Belgium begin their first ever Olympic campaign.

The Serbians are always strong in national competitions, winning bronze at the last Olympics and winners of the 2021 EuroBasket in June. Don't be fooled by their low FIBA ranking, they'll be a force to be reckoned with.

Key player to watch: Ana Dabovic is an experienced shooting guard with WNBA and Euroleague experience, and may prove to be a handful for the opposition.

China will be making their ninth appearance in the Olympics but will need to find some form given their previous Olympic performances.

The host nation will have their fans behind their back as they look to have a strong campaign. Four time reigning Asia Cup champions and will look to keep that form on the world stage.

Key player to watch: With no WNBA players, the team is a mix of youth and experience and will look to make a name for themselves in front of home fans.

Nigeria will make their second Olympic appearance in the women's competition since 2004 after finishing third at the 2020 Women's Olympic Tournament in Belgrade.

Key player to watch: Victoria Macaulay is a veteran with NBA experience and currently playing for Galatasaray, she will look to be a force inside to help the Nigerians compete against the top sides.

South Korea will make its seventh appearance at the Olympics, its first since 2008, and qualified by finishing third at the 2020 Olympic Qualifying Tournament at Belgrade.

Key player to watch: No WNBA experience, will be hard to see them making it out of the group stages due to the talent that all the other teams have.

This is Puerto Rico's first Olympic appearance, after their first appearance at the 2018 FIBA Women's World Cup. The world is their oyster as they are an unknown to many other nations. Look for them to upset a team or two in the group stages.

Key player to watch: Allison Gibson is a talented shooting guard who has earned All-star honours at the 2017 FIBA Women's AmeriCup and will look to replicate that at these Olympics.