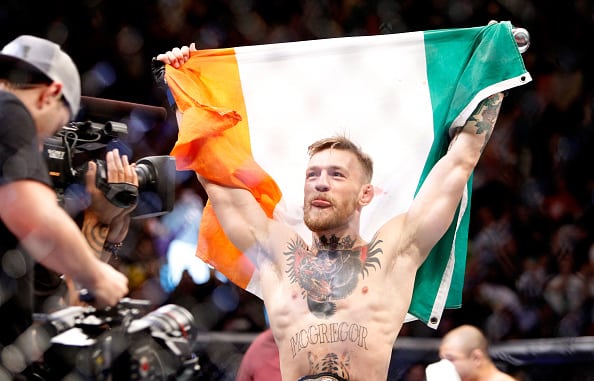 Conor McGregor has won the undisputed featherweight title and set a new record for the fastest title fight in UFC history.

The Irishman produced an incredible one punch knockout in just 13 seconds into his UFC 194 title fight with Jose Aldo who hadn't been defeated in 10 years.

As soon as the fight started, Aldo lunged in and McGregor caught him with a left hand knocking the former champ out cold before he even hit the mat forcing referee John McCarthy to stop the fight.

What made the feat even more remarkable was that it came against the UFC's number one rated pound-for-pound fighter in the sport today if not history.

It was a night of upsets as Luke Rockhold defeated Chris Weidman to become the new Middleweight Champion, defeating an opponent who was previously undefeated.

Rockhold destroyed the former champ with vicious ground and pound in the third round in an exchange that should of seen the fight stopped. However, Herb Dean would stop the fight midway through the fourth round to put an end to Weidman's reign and declare a new champion.

UFC now moves on to their final show of 2015, UFC on Fox 17 next Sunday as Lightweight champ Rafael Dos Anjos puts his belt on the line against Donald Cerrone.