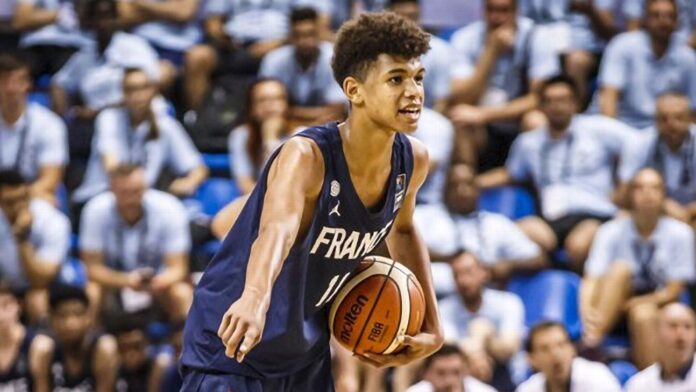 Ranked at #11 in ESPN’s 2022 mock draft, Dieng is one of the most promising prospects out of European basketball in years.

With international prospects becoming more and more popular with NBA teams, scouts have been keeping an eye on the 18-year-old phenom who last played for the INSEP Academy in France’s third division – the premiere breeding ground for young French talent – where he averaged 12.6 points, 5.8 rebounds and 2.9 assists per game.

A 6’9 playmaker, Dieng has the versatility and ball-handling skills to play at both guard positions, and has been selected in the squad to represent France at the 2021 FIBA U19 World Cup in Latvia.

He has previously represented his country at the 2019 FIBA U16 European Championships.

The teenager will also become the second ‘Next Star’ to take the court for the Breakers, following the development of RJ Hampton during the 2019/20 Hungry Jack’s NBL Season.

Hampton was selected with the #24th pick in the 2020 NBA Draft by the Denver Nuggets, and was traded to the Orlando Magic with NBA veterans Gary Harris and a first round draft pick for superstar forward Aaron Gordon. He was named Eastern Conference rookie of the month for the month of May.

“Ousmane is an exciting prospect who has had a spectacular junior career in France,” said NBL Commissioner, Jeremy Loeliger via today’s press release.

“We are delighted to welcome Ousmane to the NBL as a Next Star for the forthcoming season. He is already projected to be a first round draft pick in 2022 and it is an endorsement of the NBL that he has chosen our league as his best pathway to preparing for the NBA.

“The Next Stars program has already been a great success with Brian Bowen Jr, LaMelo Ball, RJ Hampton and Didi Louzada all progressing to the NBA after being Next Stars.

“The Next Stars program continues to attract high quality players from across the globe which validates the NBL’s standing as one of the best basketball leagues in the world outside of the NBA.

“I am sure Ousmane will achieve the similar heights that some of our previous Next Stars have and we can’t wait to see him hit the court.”

Josh Giddey is the next marquee potential draftee out of the NBL, the Adelaide 36ers product expected to be a lottery pick in the 2021 NBA Draft following a season in which he averaged 10.9 points, 7.3 rebounds and a league-leading 7.6 assists per game in 28 games played.

A Look at Some of the NBA Finals Most Prolific MVP...