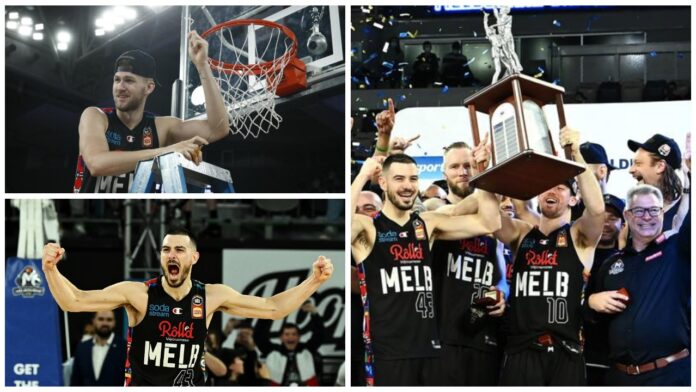 It was a strong team effort for a resilient United team, who have faced more adversity surrounding COVID than most other teams in the league.

The first two games of the series were held in Perth, due to the recent lockdown measures faced in Victoria and they also had to play all of their first-round matches away from home fans, as restrictions tightened in Melbourne.

Perth to their credit, have had to overcome their own obstacles. Injuries have plagued the Wildcats.

This includes star player Bryce Cotton, who suffered a season-ending injury near the end of the regular season.

While it took a team effort to defeat the Wildcats, there was one player who had starred all season for Melbourne.

After the match, Landale was quick to highlight the his teammates and how their work was crucial in overcoming the Wildcats.

"My teammates are the ones who do this for me, I do it for them. We do it for each other" he told the cheering crowd," said Londale.

"This medal, all it means for me is that we put together a hell of a team effort"

"I never came into this game, this series, this season worrying about MVPs"

"All I wanted was one of those trophies right there, and we managed to get it"

In front of 5,000 fans, John Cain Arena was buzzing with anticipation as the home crowd got to watch their side play for the first time all playoffs.

The match was a must-win for Perth, who lost the first 2 games of the series, which meant they needed to win all 3 possible remaining games in Melbourne in order to take home the championship trophy.

While traveling is normally seen as a disadvantage for most teams, Perth has had success in Melbourne over recent times. Coming into the match, Perth had a 7-1 record when playing finals in the John Cain Arena.

In a scorching shooting display, United took an early 25-9 lead hitting just about every shot and locking down the Wildcats on the other end. Chris Goulding (14 points 4 rebounds 2 assists) led the way hitting his first three triples as United looked to grab control of the game early.

Perth edged their way back in the closing minutes of the quarter, ramping up their defensive intensity, and began to stop settling for inefficient shots.

The 2nd and 3rd quarters were a back and forth battle with both sides starting to miss shots as the intensity ramped up.

The Perth Wildcats managed to fight their way to a slim lead in the 3rd quarter, with John Mooney (14 points 13 rebounds) and Kevin White (14 points 3 rebounds 2 assists) starting to make their presence felt on both ends of the court.

Fan favourite Yudai Baba (11p) hit the first five points of the last term, as the crowd started to roar and the game was looking to slip away from the Wildcats.

But the reigning two-time champions wouldn't go away, as they once again clawed back the lead. Perth threw everything at the home side as they kept within arms reach of United.

Never underestimate the heart of a (6 time) champion#NBLFinals #NBL21 pic.twitter.com/Dx0gu0DT8h

For the 3rd match in a row, United let their last quarter lead dwindle, and with a Todd Blanchfield 3-pointer, the Wildcats trailed by only 3 with a minute remaining.

With the game on the line, United looked to their Grand Final MVP Landale to lead them to victory. As he has all season, Landale delivered when it mattered most clutching a match-winning basket as the shot clock expired.

Despite Perth leaving everything on the court, Melbourne was able to hold off the Wildcats with a Baba dunk sealing the win and series for United.

Melbourne coach Dean Vickerman spoke after the game about the sacrifices that they and all the other clubs had made to ensure that the season could be run.

“The emotions were to stay humble and then let’s enjoy this because this group absolutely earned it. They sacrificed like every other team in the league," Vickerman said.

"You never know when another one is going to come, so enjoy this.”

When asked about how he felt about winning the championship in front of home fans, Vickerman said it was 'perfect'.

“The home and away part just didn’t have its relevance this year. It didn’t matter if it was home or away, we played in Perth, home-court advantage doesn’t really matter right now, it’s just going out and playing and dealing with what the league threw at you," said Vickerman

“It’s nice to say we were resilient and came through that challenge. To celebrate at home, it felt like it was packed tonight even though it was only half full, but it was amazing to win a championship on your home floor.”

Goulding echoed the coach's comments, praising the league, other clubs and all involved at Melbourne United for a memorable and successful season. When asked about his thoughts after the match, Goulding's excitement couldn't be contained.

“It’s amazing. This is why we lace up our shoes every single day. I tape my ankles every single day to come out and have this feeling and it’s hard to explain to people that haven’t had it yet," the captain said.

Perth Wildcats coach Trevor Gleeson praised United for their victory and his side for pushing through adversity and making it to the Grand Final.

While disappointed with the final result, he was proud of the effort and heart that his team displayed all season.

“Bryce goes down so we have four or five games to get organised and do something else at the back end of the season and then just the injuries compounded,” Gleeson told the media.

“We just didn’t have enough time to get our peak at the right time but we certainly played with our passion and our pride - those things are irreplaceable.”