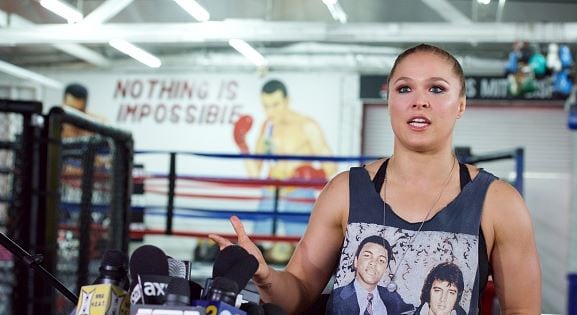 After years of trying to convince officials in Victoria that the MMA cage is a safer environment for fighters than the ring, the UFC will finally host its first show in Melbourne.

The sport of MMA is growing every year, driven mainly by the success of the sport’s largest organisation, the UFC.

The UFC’s biggest ever crowd, the 55,724 who packed into the Rogers Centre in Toronto Canada to see local boy Georges St Pierre defend the title against Jake Shields, is in genuine threat of being broken.

An injury to current UFC Welterweight champion Robbie Lawler meant that the UFC had to search for a new main event to help fill the biggest stadium to ever host an UFC event.

The organisation turned to its biggest star, Ronda Rousey, to defend her title, in efforts to make the ultimate statement down under.

Rousey, an Olympic judo bronze medallist, has made women’s MMA mainstream, and is now a role model to millions of young girls world-wide.

Her profile is second to none in the sport, and her record both in live attendances and pay-per-view buys back that up.

Given that her profile and reach grows with every media interview, every column she submits, and every movie she appears in, UFC 193 may break her personal records.

However it is the attendance record that is set to become the real talking point of this fight card.

The UFC is running only its third stadium show, with the majority of its major events being held in Las Vegas in front of crowds of between 12 and 18 thousand.

Etihad Stadium’s capacity for an AFL contest is 53,359. Add to that the thousands of seats on the ground, and Toronto’s record could fall.

Media reports indicate a crowd in excess of 50,000 is expected, however a late barrage of media appearances and even a temporary dedicated 24 hour UFC channel on fox sports should help convince a few to attend the show.

Rousey’s opponent in Holm has added extra intrigue to the potential five round title fight.

Rousey has destroyed everyone in front of her during her career with only former Strikeforce champion Miesha Tate taking her past the first round.

Holm, despite being a $9 outsider, presents a difference challenge to even the big hitting Correia, who Rousey dominated and dispatched in 34 seconds in August.

Holm is a multiple time boxing world champion with 33 wins in her 38 professional bouts. She may only have nine knockouts in those 33 wins, however her technique is better than anything Rousey has faced to date.

The challenger also had six knock outs in her nine MMA wins, and has added many weapons to go with her dangerous hands.

She’s yet to have a highlight moment in the octagon after winning two decisions in her UFC career, however a knock out, or stunning shot, is less than a second away.

Miesha Tate was expected to be Rousey’s opponent, however having beaten Tate twice, Rousey and the UFC opted to go in another direction.

In Holm they’ve matched her with a genuine outsider, yet a fighter who could shock the world with one well-placed right or left.

As well as putting their biggest star in the headlining spot, the UFC has also booked a second championship match on the card as UFC strawweight champion Joanna Jędrzejczyk defends against Valérie Létourneau.

Although neither fighter carries anywhere near the notoriety of the headliners, this could be an instance of blink and you miss it action.

Both women are lightning fast yet both have knockout power. This fight probably won’t sell many pay-per-views, but it will provide plenty of excitement, and may feature in the end of show bonuses.

Also appearing on the show is New Zealand born Australian and TUF the smashes winner Robert Whittaker as he prepares to thrown down with fellow Ultimate Fighter alumni Uriah Hall.

Whittaker is looking to record is fourth straight win, and his third win in a row in Australia, but will have a dangerous man standing across the cage in Hall.

Anyone who does not know who Hall is need only youtube his vicious knock out win over Adam Cella.

Rounding out the card are two big fights featuring four big men, and some of the most lethal strikers on the roster.

Mark Hunt and Antonio Silva will attempt to replicate their performance in Brisbane that saw them put on the best heavyweight fight in the UFC’s history.

The five round draw saw both men batter the other to a pulp, yet neither were willing to give up.

If this Sunday’s rematch is half as entertaining, we are in for a fun potential fifteen minutes.

The shorter fight, three rounds rather than the five they fought for in Brisbane, should allow both men to swing even harder, if that is at all possible.

In the other heavyweight contest, seven foot tall Stefan Struve will face Jared Rosholt is a battle of grappler vs wrestler.