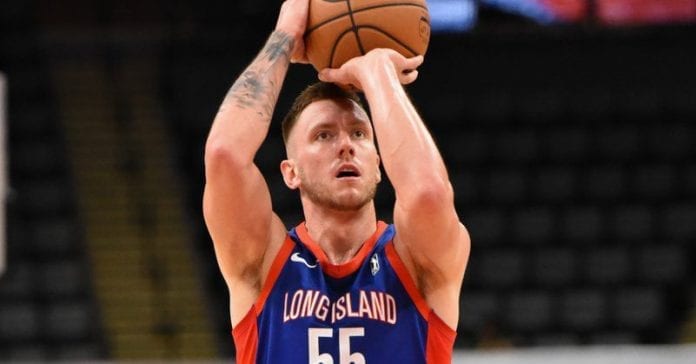 Adel started at forward for the Raptors in a defining 106-91 victory over the Grand Rapids Drive on Sunday (all times AEST).

Continuing his run of good form and solidifying his starting place in the side, Adel played 32 minutes of game time and scored 20 points, further contributing with eight rebounds, five assists and two three pointers.

This is the Raptors' fourth consecutive win, earning them second spot in the G League Eastern Conference at 9-3. Deng continues to combine well with Chris Boucher and Jordan Lloyd, who together contributed 79 of the Raptor's 106 points.

Creek has found himself at home with the Long Island Nets, and enjoyed another solid performance in their narrow 130-122 loss against the Lakeland Magic on Sunday.

The former Adelaide 36er scored 24 points in 33 minutes against Lakeland, scoring the third most points of any player on the court behind teammate Jordan McLaughlin (29) and Lakeland point guard Troy Caupain (28).

Creek added four rebounds and one assist to his figures, demonstrating his worth as a power forward that can score reliably and contribute across the court. Creek continues to garner interest from NBA teams and might be handed another crack at the major time if he continues to impress.

.@CreekMitchell uses the pump fake to free himself for the ✌️handed JAM

Humphries had his best performance ever for the BayHawks on Saturday, playing a vital role in their crushing 142-114 defeat (a franchise record for most points scored) of the Wisconsin Herd.

Humphries notched a double-double, scoring 17 points on 7-13 shooting from the floor and further tallying 10 rebounds, two assists, a steal and and swatting a team-high two blocks in 28.4 minutes of court time.

The 7-foot centre struggled to make a consistent impression in his first nine appearances for the BayHawks, but this performance shows he has what it takes to succeed in the G-League. Humphries will look to confirm his place in the BayHawks' best lineup by continuing the form he demonstrated against Wisconsin.

.@IsaacHumphries7 wants in on the three-point fun too!

peep at how many points we have 🔥 pic.twitter.com/WYmRWLXsew